[This blog is mainly written in Swedish, but this entry will be in English, for obvious reasons.]

Last week I wrote the following e-mail to Lisa Jane Persky - actress, photographer, and all around awesome individual. Lisa Jane has appeared in everything from KISS Meets The Phantom of the Park to The Cotton Club; I know her by way of Tom Scharpling.

Something quite bizarre had just happened, and it prompted me to write to LJP immediately. As I was writing her about it I was still trying to figure out the meaning of it, if indeed there was anything to it. Personally I don't read much into stuff like this - it's just one of those unlikely, odd things - but I can't help being fascinated about the sheer odds of something like this happening. Whatever the case, I thought that it made for an entertaining story that I obviously had to share with Lisa Jane - and now I'm sharing it with you.

I wanna share something that happened to me today. Stay with it; I'm pretty sure you'll dig it.


Right now I'm at my parents' place, helping them move. They have just sold their big house and are moving into an apartment in the same city as they live now. TONS of stuff to take care of - a seemingly endless amount of boxes, furniture, clothes, old books, bayonets(!), etc. Staggering. But we're having fun too. Finding lots of stuff from when I was kid, and so on.


Today my Mom and I are in the kitchen, cleaning out some cupboards. On the inside of one of the cupboard doors, Mom has under the course of 35+ years been taping up recipes that don't fit anywhere else - small bits and pieces of paper, stuff cut out from newspapers, magazines, hand-written scribbles. The perfect salad! Banana bread! Salmon, Mediterranean-style! It's like a bulletin board filled with recipes.


So Mom asks me if I could take all the recipes down, and she'll take a look at them and see if there's anything worth saving. I carefully remove the decade-old Scotch tape and take them all down. As I'm removing one piece of paper another falls down on the counter. It's a recipe for corn soup, most likely cut out from a newspaper. It looks pretty old. Corn soup? I point it out to Mom - she replies, "Corn soup? Dear God, what was I thinking?!".


As it happens, this tiny recipe lands on the counter upside-down. I notice that the back of it contains parts of that day's TV schedule. Mind you, the note isn't dated, so it could be from anywhere between 1974 and now, basically. And the note is only like 5 x 10 cm big (couple of inches). And it's a complete coincidence that I'm the one removing the recipes from the cupboard door, and not Mom, and it's pure happenstance that the note happens to fall down and land upside down. And yet, and yet... this is what the back of the note looks like: 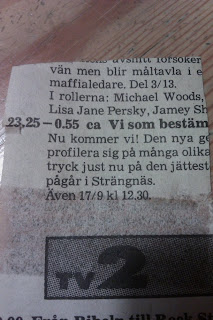 After some consulting with IMDB, I'm concluding that the note must be from 1987 or so, and that the fragmented TV schedule is referring to the show "Private Eye". Keep in mind that in those days, Sweden only had two - yes, two - TV channels. And American imports weren't as common as they are today. According to IMDB, "Private Eye" lasted for one season, and you were on it for seven episodes. Somehow that single season must have made its way to one of those public broadcast channels, and on the particular day that the corn soup recipe was published in the paper, one of those seven episodes must have aired.


That's it, that's the story. I think that for once I'm sincere when I say: what are the odds? I really want to know that. Unbelievable.


One of those things.