COURIC: You've cited Alaska's proximity to Russia as part of your foreign policy experience. What did you mean by that?

PALIN: That Alaska has a very narrow maritime border between a foreign country, Russia, and on our other side, the land-- boundary that we have with-- Canada. It-- it's funny that a comment like that was-- kind of made to-- cari-- I don't know, you know? Reporters--

COURIC: Explain to me why that enhances your foreign policy credentials.

PALIN: Well, it certainly does because our-- our next door neighbors are foreign countries. They're in the state that I am the executive of. And there in Russia--

COURIC: Have you ever been involved with any negotiations, for example, with the Russians?

PALIN: We have trade missions back and forth. We-- we do-- it's very important when you consider even national security issues with Russia as Putin rears his head and comes into the air space of the United States of America, where-- where do they go? It's Alaska. It's just right over the border. It is-- from Alaska that we send those out to make sure that an eye is being kept on this very powerful nation, Russia, because they are right there. They are right next to-- to our state.
kl. 09:10 7 kommentarer:

Freedland: "So somehow Palin slips out of reach, no revelation - no matter how jaw-dropping or career-ending were it applied to a normal candidate - doing sufficient damage to slow her apparent march to power, dragging the charisma-deprived McCain behind her."

Rude: "The truly aggravating thing is watching opportunity after opportunity pass by the Obama campaign. Here's some advice to them: you are not living in subtle times. You are living in an era in our nation where people only react if you use a fucking mallet, not a stiletto, to get your point across. The choice of Sarah Palin as a running mate was a brilliant read of the national zeitgeist. She's like the winner of America's Next Top Model, not a qualified politician, and as such, idiot America thinks they relate."

McKay: "Something is not right. We have a terrific candidate and a terrific VP candidate. We're coming off the worst eight years in our country's history. Six of those eight years the Congress, White House and even the Supreme Court were controlled by the Republicans and the last two years the R's have filibustered like tantrum throwing 4-year-olds, yet we're going to elect a Republican who voted with that leadership 90% of the time and a former sportscaster who wants to teach Adam and Eve as science? That's not odd as a difference of opinion, that's logically and mathematically queer." 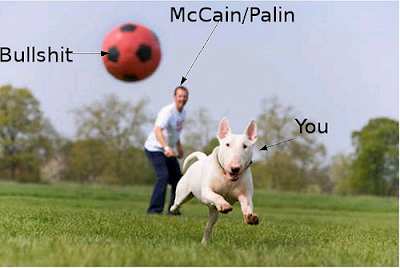